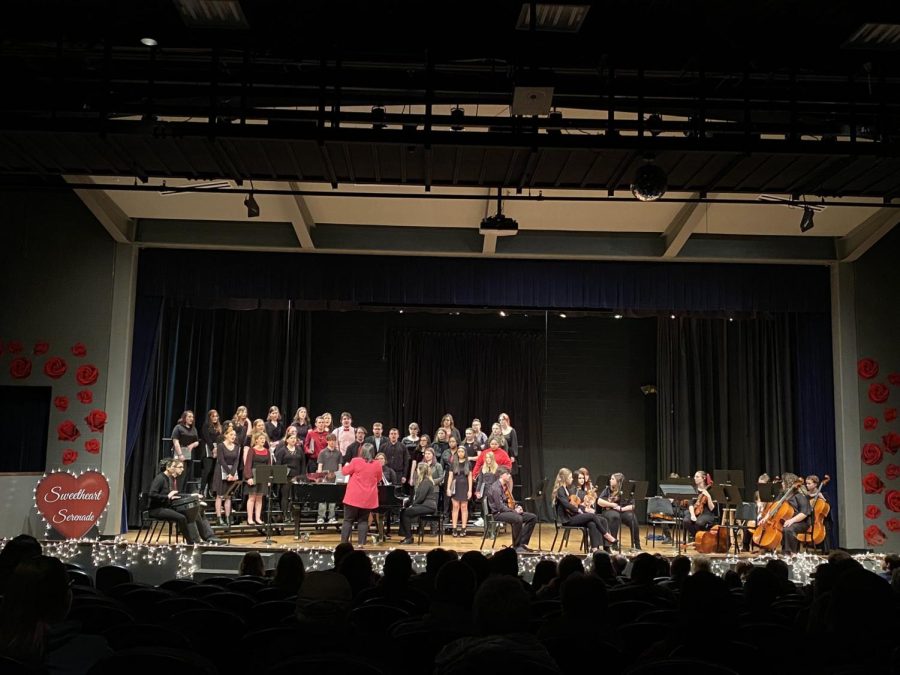 On February 25th, the GCHS PAC and commons were packed for the annual Sweetheart Serenade.

The GCHS choirs, Chamber Orchestra, and Jazz Band, lead by Ms. Utley, Dr. Hill, and Mr. Burchett respectively, put on a heart-stopping show for the community.

“All of the songs has their own easy and difficult aspects, but on the terms of performance, ‘Circa Mea’ was the most difficult because of the lack of piano accompaniment and the song’s transitions,” said Choir Director Ms. Utley.

“I liked performing my solo for ‘I’m Bound Away’ in Men’s Choir,” said Alex Rhea, a senior tenor. “It was somewhat difficult to register the loudness of the mic because I’ve never used one, but I had a lot of fun.”

Charlize Klay is a senior member of Choir, Orchestra, and Jazz Band. Klay spent her night displaying her wide range of musical talent as she moved from group-to-group. She performed a stunning solo with Jazz Band, ‘Relax Max’ by Dinah Washington.

In between the performances, Chamber Orchestra featured renditions such as “Can’t Help Falling in Love by Elvis Presley.  Other songs followed, including ‘Remember me’ by Robert Lopez, ‘Wind Beneath My Wings’ by Bette Midler, and ‘Waltz’ (Sleeping Beauty) by Pyotr Ilyich Tchaikovsky.

“The hardest piece had to be the ‘Waltz’ from Sleeping Beauty because of the speed and the many entrances,” said Dr. Hill, Orchestra Director. “Not every member of Chamber Orchestra are in the same class, so we only had one or two moments to put together all the pieces of some of the songs as one big group.”

After this, visitors were asked to join performers in the main commons for the second half of the concert. As the Jazz Band played, everyone indulged in a table of sweets and a night of dancing.

Between songs, Jamie Lemay read poetry, and Kristina Belt and Bennett Routen performed a duet of ‘In a Crowd of Thousands.’