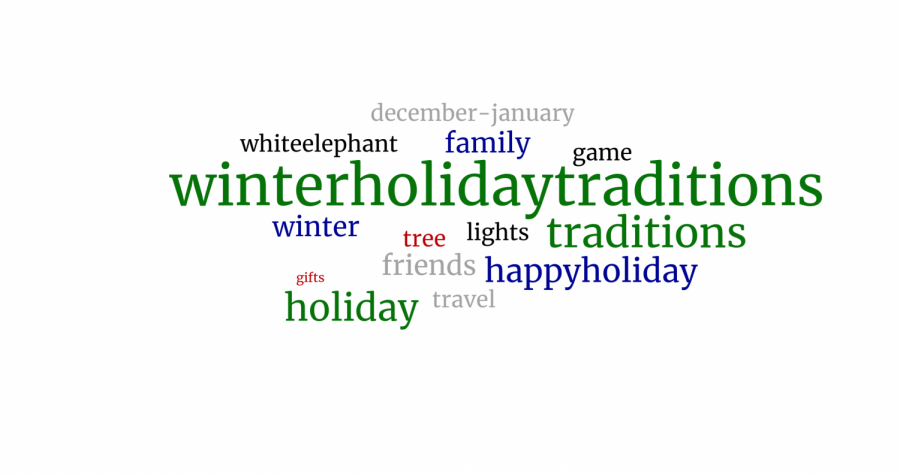 Many Eagles have unique traditions that are less conventional.

Taylor Griner’s tradition is to open gifts before Christmas: “I remember opening one of my first diamond paintings. It is my favorite pre-gift I’ve ever gotten.”

Joshua Carnahan said, “We have an annual Nerf war for the younger kid and an annual kick boxing match for the older kids. I usually host the Nerf war because I’m the oldest.”

Others take the holiday as an opportunity to participate in the season of giving.

“I like giving back to people and paying things forward,” said Vice Principal Mr. Horn. “How I do that changes every year, however.”

Vice Principal Mrs. Wright-Holmes has a family tradition of looking at lights with her son: “Part of the tradition is always going to new places we’ve never seen lights at before.”

Kailey Connell said her favorite tradition is putting up the Christmas tree. “We always watch Christmas Story while doing it. I mainly just decorate the tree instead of putting it up.”

Charlize Klay’s tradition is based around her school fine arts role. According to Charlize, “I always have a lot of winter concerts for choir, orchestra, and band. I really love being in the Candy Cane Classic every year.”

History teacher Mr. Richard said his tradition began with Loretta Lynn: “My wife and I open one gift before Christmas every year. It started when my wife and I were dating. She was a big Loretta Lynn fan so I got her the movie Coal Miner’s Daughter with heavily featured Mrs. Lynn. We watched the movie on Christmas Eve so watching the movie and opening one gift is now our main tradition.”