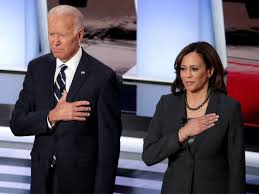 As we welcome the new year, we also welcome in our new president Joseph Robinette Biden Jr. This morning of January 20th, 2021, Joe Biden was sworn into office and gave his inauguration speech where he talked about topics that we have dealt with in the previous months.

There was a special performance by Jennifer Lopez where she sang “This Land is Your Land” and “America the Beautiful.”

Kamala Harris made history today as the first female, first black Vice President and the highest ranking female politician that has ever been sworn into office. Mrs. Kamala Harris was born into a family with a Jamaican father and an Indian mother and is the first person of South Asian descent to be sworn in.

President Biden sent out his first tweet on Twitter on the official POTUS account. It reads, “There is no time to waste when it comes to tackling the crisis  we face. That’s why today, I am heading to the Oval Office to get right to work on delivering bold action and immediate relief for American families.”

As the inauguration began, Donald Trump departed for Florida. Trump has broke the 40-year-old tradition of attending the next president’s inauguration speech. Mike Pence, however, did attend the ceremony.