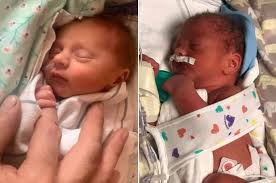 These two new siblings may be twins, but they were not born on the exact same day — having both newborns being born in totally different years and decades.

Dawn Gilliam and Jason Tello of Pendleton, Indiana, started off the new year with a special surprise: one arriving before and the other arriving after the clock struck midnight. But the twins, Joslyn and Jaxon Tello, weren’t actually due until February 19th, 2020.

Gilliam went to Ascension St. Vincent Carmel Hospital on New Year’s Eve. According to CNN affiliate WBNS, Gilliam was concerned about a lack of fetal movement.

“Earlier, we talked about it would be great to have them born on different dates,” said Tello. “But here we are with this surprise – different dates, different years. That was definitely interesting for us for sure. We’re still kind of speechless still.”

According to WBNS, Joslyn and Jaxon are both on feeding tubes and may be in the hospital for some time.

This will definitely make an interesting sibling rivalry growing up.